I’ve been warned about this before, cruising with a schedule doesn’t work. This is more true if you’re sailing engine less. While it’s true that we have an outboard, we don’t carry that much petrol and when there’s a reasonable chop the motor is not much use.

We broke a cardinal rule of cruising. Whilst we’re both taking a timeout from work at the moment, I’ve been temporarily sucked back into work for some important business deals to get closed out.

This unfortunate or fortunate, depending on your perspective, fact has lead to us sailing back to the marina in less than favourable conditions. The schedule dictated our sailing day. Weather plays an important role in sailing for us. Since we’re still learning we don’t like to sail in conditions that is beyond our ability and comfort levels.

I was looking at the forecasts for days. There was either too much wind or no wind. When I finally saw a forecast that looked like we might be able to sail in the morning and get close to the marina, we started to plan our journey.

It’s not a huge journey, it’s only 28 nautical miles to reach the marina. The forecasts called for 1 to 7 knots in the morning with the wind dying down after 10am. The winds were shifting between SW., E. and NE.

The plan was to get up early and sail for as long as we can. If we don’t make it very far we can always anchor closer and hopefully wait the weather out to make it home on another day.

We woke up at 6am. and got Taleisin ready to sail. We skipped breakfast opting to eat while under way. We weighed anchor and started motoring out of the river. It was nice and calm, compared to the previous day. I looked at the clock as we were motoring out, it was 7am.

Once we got out of the river I said to Annie, lets get some sail up! We hoisted the sails and the wind filled them. We closed the throttle on the motor and put it in neutral. That’s when the wind decided to die.

Some numbers… We had less than a full tank of petrol. When we left on our adventure we motored for 16nm. and used most of our petrol. With no wind that leaves us 12nm. short of the marina. If you’re running the numbers, this doesn’t look favourable.

Plan A is to sail. Plan B is to motor to a closer anchorage and hopefully we can then sail back to the marina before the heavy winds come up the next day. Plan A does seem to be viable at this stage. So we tried an experiment, open the throttle just a little get Taleisin moving slowly. In theory we should get a very long running time on the petrol we have if we’re not burning that much of it along the way.

We managed to get Taleisin moving at 2 knots with the throttle slightly above idle. We kept the sails up so that we could catch any puff of wind and hopefully get a bit of a lift from that to move us along a little faster.

This worked well for a few hours, we’d be moving along at 2-3 knots, a little puff would come up and push us along at 4 knots. We managed this on the same tack all the way through the Whangaparoa passage. When we were almost through the channel the wind seemed to pick up. We turned the engine off and sailed at 4.5 knots! Awesome, it looks like we might make it home at this rate, sure it would be slow and take most of the day. We had no other plans so we didn’t care.

Well, it was nice while it lasted. Five minutes later the wind dropped right off. So we sat bobbing around. It was a Saturday and this meant that everybody with a power boat is out on the water, since it’s perfect conditions for their preferred type of boating. With power boats zooming past us their wakes started to make it uncomfortable onboard. We made the call to keep motoring at slow speed and hopefully we’ll catch a bit more wind.

Motoring was fine for a little while with a direct line to our way point. Then the wind came up again, but it changed direction. We spent the next few hours trying to motor slowly with winds coming and going and changing direction all the time. We’re sailors, so we tack when we need to, no problem. We kept a close eye on the amount of petrol we had left, every half an hour we’d have a look at petrol and distance left. We found some entertainment in listening to the VHF radio on the coast guard channel. You can learn a lot by listening to others radio in their situation. Once in a while they would broadcast that Ovation of the seas (a very large cruise ship) was anchored at some location that we didn’t quite know. The broadcast stated to keep 60 meters away from the ship at all times and to keep wakes at a minimum. Slowly the situation started to turn more favourable. So we decided to just go for it, and head for the marina!

When we finally made it back to the harbour we’ve already had a long day and then we finally got some wind. We had enough wind so we could turn the engine off and reach all the way to the marina. We were also moving a lot faster.

This was all great until we got to the Port of Auckland docks. All of a sudden the wind dropped right down. This was likely due to the fact that there was a huge cruise ship right in the middle of the harbour. 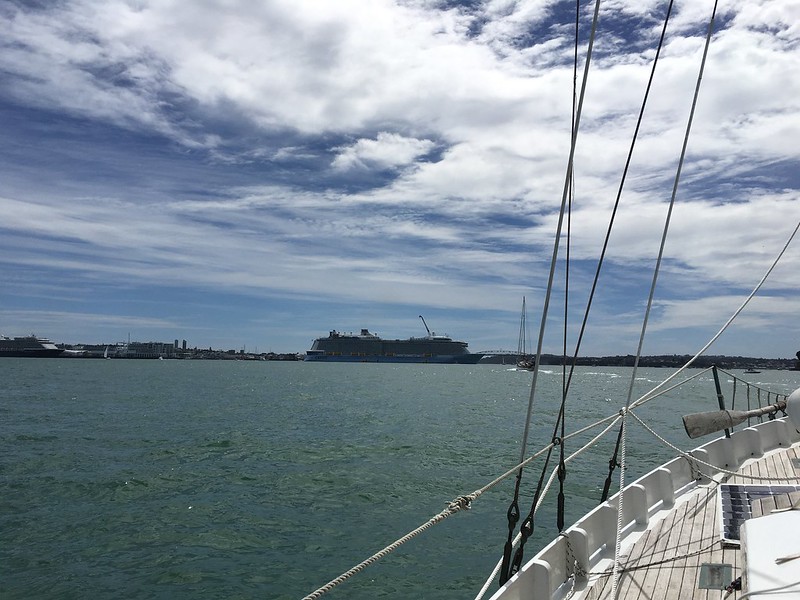 Usually it takes about 30 minutes to get back to the marina from here. Let me describe the scenario. It’s Saturday afternoon, it’s perfect power boat weather. All of them are out on the water. The location of the harbour we’re in has been described as a washing machine to me in the past. There’s power boats, ferries, ship’s tenders zipping back and forth. Combined with the huge ship in the middle of the harbour. This is chaos. We have no wind to sail with, which we need since the motor is no use because of the chop. Basically we’re in the most challenging situation we’ve been in to date. The right thing to do would have been to anchor somewhere and wait for more favourable conditions. Cruising with a schedule doesn’t work.

We still have our sails set, since we need to sail in this spot. We still have the motor going since we have no wind and we can’t be floating around this area as it’s busy. Annie’s sitting by the outboard throttle to close it when the motor lifts out of the water. I’m trying to keep the boat on course and avoid collision since power boat skippers for some reason like to pass really close by and they seem to like crossing in front of us. Given that we’re not really sailing we don’t have right of way since we’re technically a power boat at this point.

We’re moving very slowly, we’re trying to figure out the best course to steer to get out of this mess as quickly as possible. Given the huge ship the winds became very fluky. Without any warning we’d suddenly have our head sails back winded and our bow pushed over. Given the tendency of power boats to pass really close to us, this became a very challenging situation as the wind can put us into a possible collision at any moment. That means we have to tack and also keep the motor under control. Since the winds are light we had both head sails up, this meant we had quite a few things to deal with and quickly. As soon as we finished the operation the wind would shift and we’d do it all over again. This process was repeated relentlessly. We were tacking back and forth, motoring for a few second and sailing for a few seconds. Then another boat would come by. The wakes would rock the boat back and forth and bounce up and down. Tack, motor, dodge a boat. Tack, motor, doge, repeat. It seemed like it was never ending.

It took us 2 hours to get through this little section of the harbour. We were absolutely exhausted by it, after we’ve already been out in the sun all day.

When we finally got past the cruise ship the wind picked up, the direction was stable and we sailed right to the marina entrance. I dropped the jib and the main. Annie steered us into the marina while still under stays’l. Once we got into flat clam water and the motor was working properly, I dropped the stays’l.

At this point I took over the helm from Annie and we slowly made our way to our slip. Slow and easy. I managed to put Taleisin into the slip with an absolute perfect landing. Annie grabbed the mooring lines and secured Taleisin. I looked at the clock and it was 5pm. It felt great to do this with precision! I just wish the usual spectators were there to witness it. It would seem people are only ever watching when I make a mess of things.

It was a nice calm day. We had the most challenging day of sailing to date. This turned out to be a big adventure, even though it was only a short distance to cover. We were absolutely exhausted! We both slept very well that night!

The moral of the story here is not to have more petrol, but you can be forgiven for thinking that. The real moral of the story here is that you cannot allow a schedule to dictate your cruising. Sure, if we had a boat with an inboard we could have motored all the way back at 7 knots and made the journey in 4 hours. It would have been uneventful and no big deal. Instead we got a huge adventure, we got challenged. We managed to get through the challenge and it felt great. Because of the choices we make, it’s possible to have adventures all the time or none of the time. Things that make certain tasks easier also takes a lot away from it. We could choose the easy way or we could choose adventure…

As a final comment, there was only one power boat that was truly a pain in the rear, the big one disrupting the winds. The other ones are just part of life. Regardless it still contributed a lot to this adventure. For those wondering we still had about 3.5 litres of petrol left.