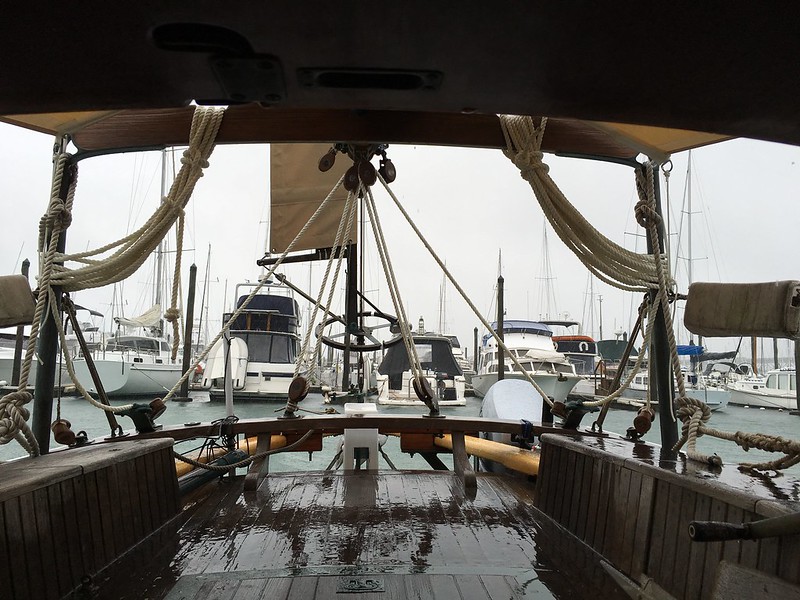 Let me explain. It’s now been a week and a half since Taleisin has been our only home. We spent the last month sorting through all our stuff and selling everything that is surplus to requirement. The rest was put into storage awaiting our return some day in the future. We got the smallest storage unit that we could get away with and really only stored things that we wanted to store. This was challenging as it forced us to go through absolutely everything we own to ensure we’re not paying to store junk.

When we surrendered the keys to the rental house we still had 2 car loads of stuff that we had to deal with. It was either coming with us onboard Taleisin or we would have to get rid of it since our storage unit was full. I guess you could say that we’ve completely de-cluttered and paired down to the essentials.

A few things we’ve learnt in the mean time…

Taleisin is comfortable, and not just comfortable for cruising, comfortable for living. I agree that 30 foot is a small boat, but she doesn’t feel small. We have had to adjust the way we do things, but it’s not been a huge hassle for us. We’ve been living at the dock without electricity, other than that provided by our 100 watt solar panel. Honestly it’s not a hardship, we love the kerosene lamps and cooking with LPG (aka propane) is a joy. The ice box does it’s job well enough that we don’t miss the fridge. You can tell that Taleisin’s interior was designed to be very liveable, I cannot compare it to other boats but she’s perfect.

Keeping a small space tidy is a bit harder since it doesn’t take much for it to get completely out of hand. Combine this with the fact that we’re still busy loading stuff onto Taleisin and the problem compounds very quickly. We have just about got everything onboard now and things are starting to look quite good. We’re still a few days away from casting off as we have a few boat jobs to complete before we can go. Then there’s the all important provisioning.

The transition has been significantly eased by spending nights aboard in the marina and a 3 week cruise, without this it would have been much harder. We gave up broadcast TV almost 2 years ago, opting for on demand streaming via the internet. This actually lead to the act of TV watching becoming an active engagement rather than it running continuously and nobody paying attention. The result was that we ended up watching a lot less TV than we did before. TV is actually one of the things we do not miss.

You might be wondering, so what do we miss? Interestingly not much. While we have to walk 500 meters to the bathroom block for a shower and to use the toilet it’s not a huge burden. While we could use the bucket and wag bag system on aboard we feel it’s just a needless waste.

It’s raining today, the first day it’s really raining while living on board. This will be a real test to see just how inconvenient it would be to head to the bathroom block. We had to head out in the rain a few times today and it’s starting to wear on Annie a little, but as with everything I suspect we’ll just get used to it and life will go on as it always has.

Another point of interest is the psychology involved in pairing down possessions, it’s hard! Do not let anybody tell you anything different. You’re forced to confront your decisions about buying something that turned out to be completely useless, cost a lot of money and has absolutely no resale value. This implies that there would be a huge loss involved and that the cost or reacquisition would be huge as well, but the initial point was that the item was useless. I do not know why, but I’ve had a lot of these items that I’ve justified keeping for many years. I can now say that after letting go of a few of these items it becomes easier to let go of the rest. At some point it becomes harder to hold onto things than to let things go. Annie has had to put the breaks on me as I’d just continue till there’s nothing left.

Being at the point we’re currently at, which is on the brink of cruising I can understand why most people never even get this far. It’s hard! Yes it’s easy to talk about cruising and dream about cruising, but it’s not easy to get to the actual cruising. While most people were supportive in theory and thought it to be a great idea. In practice we found that nobody really wants us to go cruising. Both Annie and myself found it incredibly hard to break ties with work. While Annie had the simple case of just resigning and it was over for me it’s not that simple. As a person heavily involved in tech start-ups and being a key person from everybody’s perspective in the ventures, it’s hard. I’ve had to sail back in unfavourable conditions for meetings to secure future business at critical junctures. Now that I’ve actually put a stake in the ground and said, No more! I could sense the disappointment in my business collogues. While I personally do not believe they will struggle without me as I’ve trained those around me to deal with everything I’ve been dealing with. I can understand that they might feel like they are losing a lot.

Family and friends has been a lot more supportive than anticipated. I’ve read many books stating that family and friends are not supportive as they will miss you too much. We have, however, not made the mistake of letting friends or family believe that this is up for negotiation. This is something both of us desperately need. It’s been a lot easier from the friends and family perspective than expected. Those friends and family reading this, thank you very much for being supportive and understanding regardless of how you might really feel about it. It has been hard enough to reach this point without having active discouragement from you guys! We really appreciate it.

Naturally those of you reading this will want to know what our next plans are. Well we have a few months off, we might head North, or South depending on the wind direction. We plan on taking things as they come, we have no huge aspirations to circumnavigate or to round Cape Horn. Right now we just want to learn to sail Taleisin properly and sail her well. We need some time out from the real world. The plan is to sail till the end of the season or until we get sick of it, which ever comes first. If we manage to reach that point we can decide what’s next at that time!

If you’re considering cruising and wondering at this point if it’s worth the trouble. I can’t speak from experience, but I can assure you that absolutely every cruiser I’ve spoken to has told me that it was the best decision they have ever made. Surely if it’s this hard to get to this point, it’s got to be worth the effort. The other thing to keep in mind is that if it was easy to do, everybody would be doing it. If everybody was doing it we’d be looking for something else to do as that would then be the real world…